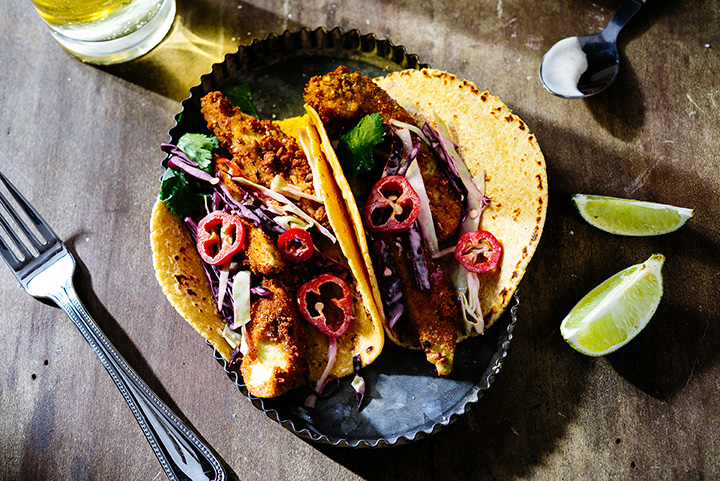 South Dakota is home to taco specialties that you won’t find everywhere. Not only does the state’s best taco spots offer up delicious, authentic Mexican fare, but also the Native American dish known as Indian tacos (or Navajo tacos). The options, combinations, rich flavors and spices are seemingly endless in South Dakota. Chow down at these 9 top-notch taco spots in the state!

This Mexican restaurant serves tacos, burritos, nachos, and more. A large offering of vegetarian options is available, including the three bean taco, veggie burrito, veggie enchiladas, veggie fajita burrito, veggie quesadilla, and more. Seventeen varieties of tacos are available, with the most popular being the carne asada taco, the chorizo taco, the shredded beef taco, and the pollo asada taco. Classic Mexican desserts like fried ice cream, churros, and arroz con leche are served. Head to Giliberto’s for an authentic Mexican experience that you won’t find anywhere else in South Dakota!

This authentic Mexican eatery combines classics like carnitas, enchiladas, burritos, and tacos with the best tequila selection in Rapid City with over 52 featured labels. The atmosphere draws inspiration from Mexico’s laidback beaches, with an outdoor patio with fireplace and a rooftop cantina. Taco options include “Three Amigos,” jalapeno barbeque brisket, spicy shrimp, chipotle chicken, fish, and street tacos. All tacos are served with rice, refried beans, and a com cake.

A trip to South Dakota isn’t complete without eating South Dakota’s local take on the taco. Served on flat fry bread topped with bison meat or beef, veggies like lettuce and tomatoes, and cheese, local Indian tacos will make you forget about traditional tacos! The restaurant is small and quaint, but the portions are big. From bison burgers, to signature tacos, to sour-dough pancakes, Cheyenne Crossing serves up delicious local favorites.

Spend an afternoon exploring the Badlands National Park and then head over to Cedar Pass afterward! The restaurant has a large offering of locally and regionally sources dishes. They also serve up the Sioux taco, with fluffy, homemade fry bread topped with refried beans, buffalo meat or vegetarian spicy black bean burger, shredded lettuce, tomatoes, and sprinkled with black olives. There is a selection of vegetarian and gluten-free options available. These tacos are among the best in the Mount Rushmore state!

Located in the shadow of Crazy Horse Memorial, Laughing Water Restaurant serves up Native American foods. Customers enjoy the casual elegant, the spectacular view, and fantastic menu choices. The tacos are served on fry bread and topped with beef, refried beans, lettuce, tomatoes, cheese, onions, and sour cream. Other traditional specialties include Tatanka Stew, made from Black Hills buffalo, carrots, sweet peas, and potatoes simmered with a specialty blend of zesty seasonings and served with a piece of fry bread, or Wojapi, a type of dessert in which fry bread is topped with warm berry sauce. Dining on Indian tacos in the shadow of Crazy Horse is a uniquely South Dakota experience that you can’t miss!

Barbacoa’s Burritos and Wraps is a Mexican-American-Thai fusion restaurant. It sounds unusual, but (trust us) it is an amazing combination. The portions are enormous and the food is delicious. Taco meat choices are beef, barbacoa, chicken, pork, or steak. This local favorite not only serves tacos, but also eight varieties of burritos, four varieties of Pad Thai, chili, fajitas, eight types of wraps, nachos with four choices of meat, and soup.

This small family-owned restaurant serves up the tastes of Mexico. Owner Ana Line Munoz moved to Rapid City from central Mexico and finally fulfilled her dream of opening a restaurant after noticing the lack of authentic Mexican cuisine in the area. All the items are made from scratch with only the freshest ingredients. In addition to tacos, enchiladas, chimichangas, tamales, and more are also served.

As soon as you walk in the door, you’ll feel like you’re in Mexico. This quaint restaurant serves plenty of taco options, including tacos supremas, tacos a la carte, taco salad, and three tacos. Other popular options are cheese crispy quesadillas, sizzling fajitas, Guadalajara’s burrito, and the vegetarian options.