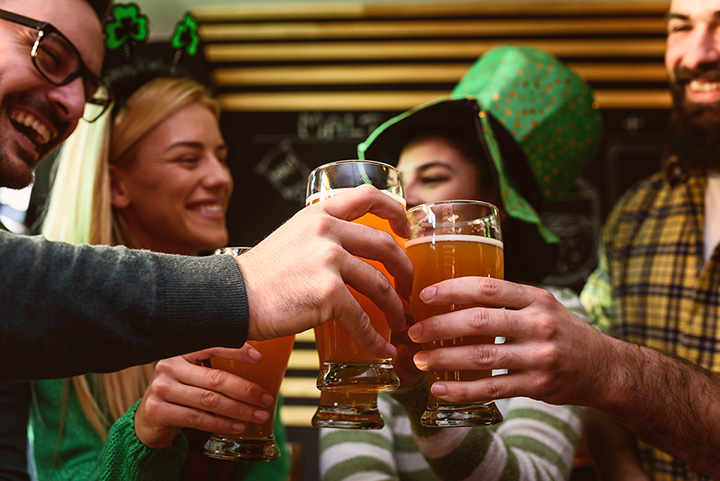 From 5Ks, to parades, to pub crawls, South Dakota’s many celebrations make it among the very best to celebrate St. Patrick’s Day. Throw on some green attire, take a swig of Guinness, and hit up these 6 attractions across the Mount Rushmore State this March 17!

Deadwood, South Dakota's legendary Wild West town, celebrates St. Patrick's Day across multiple days with pub crawls, the Leprechaun Olympics, parades, and live music. Open containers are allowed in special zones with an official cup. Participate in the Leprechaun Olympics and win prizes! Everyone turns in score sheets at the awards party. Tap into your philanthropic side by going to the St. Panties (no, that's not a typo!) Day Fundraiser in Saloon #10 to benefit the American Cancer Society. The town of Deadwood reports well over 1,200 participants annually.

St. Patrick’s Day weekend in Sioux Falls kicks off with the annual “Painting of the Shamrock.” The painting is followed by the parade. It is a “people’s parade,” meaning anyone can participate as long as they’re wearing a button. The buttons cost $3 and all proceeds are donated to the Special Olympics and other children’s charities in the Sioux Falls area.

Watertown's annual St. Patrick's Day Celebration features events such as the Shamrock Shuffle 5K Fun Run, Little Miss Shamrock and Mr. Leprechaun Contest, and the St. Patrick's Day Parade. Participants are encouraged to wear festive clothing, and the best dressed will win awards. Don't forget to head over to Dempsey's Pub, where drawings will be held for prizes including a fridge filled with Guinness and corned beef and a trip for two to Ireland.

The parade is on March 17 and starts at Georgia Morse Middle School on East Capital Avenue and works its way down Pleasant to Pierre Street to the Legion Cabin. Attendees are encouraged to dress up and show their heritage and family names.

In addition to the parade, Pierre also is home to the annual Irish Stew Feed, hosted by the Pierre/Fort Pierre Lions Club. Attendees will be served delicious traditional Irish stew. The cost is $10 for adults and $5 for kids 10 years and younger. It will be held directly after the parade on March 17. All proceeds from the meal are used to support vision projects such as eye exams and glasses for individuals in need in Pierre.

Head down to McNally’s Irish Pub for a huge St. Patty’s Day party. There will be live music, an Irish-themed breakfast, and a limited Irish menu along with Bud Light green taps. McNally’s also hosts a “Month Count Down to St. Patrick’s Day” party on March 17 for those who just can’t wait until March.