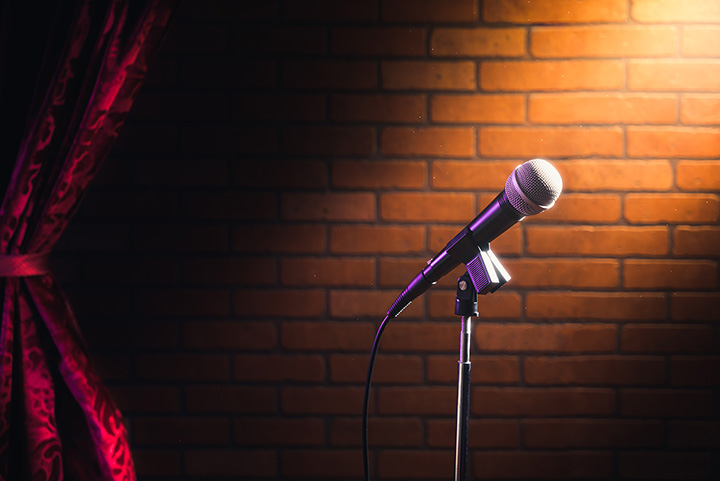 Want to laugh until you cry? South Dakota’s spirited comedy scene has you covered! The state has everything from knee-slapping stand-up to hilarious improv groups. Laughing the night away over drinks with your friends makes for a memorable night, and these six excellent comedy spots in South Dakota will give you just that.

Laugh away the winter blues at Naughti Wines comedy nights! This Hill City winery offers a shuttle from Rapid City with complimentary beverages. Featured comedians are nationwide names, so this is the spot to see well-established talent. Wine tasting, improv nights, dinner theater, live music, and parties are also held at this venue. Comedy night only comes once a month, so mark your calendar!

Housed in the original Rapid City firehouse building built in 1915, Firehouse is full of history, delicious food, tasty brews, and comedy shows. At any given time, they have nine brews on tap and make around 40 unique beers every year. With exposed brick walls, vintage fireman equipment, and cozy lighting, the atmosphere is one of a kind. But with the brilliantly hilarious cast, you won’t be worrying about the decor! The specialty is musical comedies, including both famous and under-the-radar plays. Beer, food, and laughs—what more could you ask for?

Loud American Roadhouse, located downtown in the infamous town of Sturgis, hosts legendary entertainers and the food is to die for. The most popular menu item is the steak tips. Trust us, you’ll want to try them! The service is friendly and the prices are reasonable. Head to their weekly open mic night to showcase your talent or attend a headliner’s show. Check their website for a complete listing of events. One evening at the Loud American Roadhouse will prove that laughter is the best medicine!

The tiny town of Kimball has only 700 people but houses a big-time comedy club. Club Vega’s food and entertainment draws customers from across the state. The prime rib and burgers are the best dishes. Entertainment includes comedy nights, holiday parties, sports game viewings, live music, karaoke, games, and more!

This pub has a large variety of beers, great prices, nightly specials, free popcorn, and top-notch entertainment. The open mic casts a wide net, so on any given night, customers are likely to hear live music, poetry readings, magicians, puppet masters, skits, jugglers, comedy, and more. The Varsity Pub is an oasis for entertainment of all types!

Located in historic Keystone, this Wild West-themed saloon is known for ambiance, good drinks, and laughs! Their most popular event is the Western Comedy Gun Show. Other events include western comedy, live music, and parties. Keeping with the theme, Red Garter serves 1,800 soda fountain drinks such as a Shirley Temple, Roy Rogers, or Italian crème soda, original Prohibition soda fountain specialties such as Lime Rickey or egg cream, and rotating local craft beers. Have a drink and some laughs at this Wild West saloon!

View more South Dakota Comedy Clubs.
Select a South Dakota town to find
the Best Things-To-Do and Places To Go around you